“On December 1, 1919, I went to Atlanta, Georgia, at my own expense to help Brother Harold Thomas set up Eta Chapter. The same was composed of professional men in Atlanta and selected students of Morehouse College, Atlanta and Clark Universities, and Gammon Theological Seminary.”

The Eta Chapter of Omega Psi Phi Fraternity, Incorporated was founded in Atlanta, Georgia on December 1, 1919.  It was the seventh permanent chapter of the fraternity to be established.  Eta Chapter was set up upon the initiative of Brother Harold H. Thomas of Beta Chapter, and Brothers Horace A. Hodges, Harvey Smith, Lawrence R. Harper, and Clinton E. Warner, Sr. of the Camp Howard Chapter, all of whom were Atlanta residents.  These Brothers were aided in their endeavors by Brother Raymond G. Robinson, the Fraternity’s seventh Grand Basileus.  Eta Chapter received its charter on December 27, 1919. 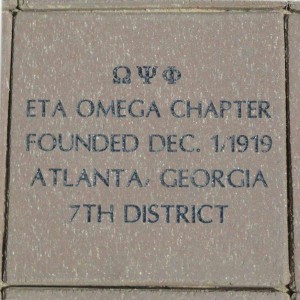 Eta Omega brick at the Omega Monument at Howard University

Eta Chapter was comprised of Brothers upholding the principles of OMEGA at Atlanta University, Clark University (later College), Morehouse College, Gammon Theological Seminary, and college graduates in the Atlanta area.  It was the first chapter of any Black Greek-letter organization to be founded and chartered in the state of Georgia.

Brothers from the institutions that made up Eta Chapter eventually established their own chapters: Omicron at Gammon Theological Seminary (1921); Psi at Morehouse (1921); Tau at Atlanta University (1922); and Beta Psi at Clark (1923); leaving Eta for graduates.  Under the leadership of Grand Basileus J. Alston Atkins (1922-1923), the Fraternity developed a new naming scheme for undergraduate and graduate chapters.  Thus, the original Eta Chapter has since been known as Eta Omega Chapter.

Throughout its 100+ years of existence, Eta Omega has been at the forefront of Omega Psi Phi’s efforts in Georgia, the Seventh District, and throughout the Fraternity as a whole.  The Chapter has hosted or co-hosted five Grand Conclaves.  It has also produced outstanding Fraternity leaders at the National, District, and State levels, including the 8th Grand Basileus, aforementioned Chapter founder Brother Harold H. Thomas, and the 33rd Grand Basileus, Brother Moses C. Norman, Sr. Brother Norman also holds the distinction of being the only man in Omega Psi Phi’s history to be elected to the Fraternity’s highest office three consecutive times.  Eta Omega Chapter has regularly been recognized for its community service and programs; named 2014 Region One Graduate Chapter of the Year by Omega Psi Phi Fraternity, Inc, State of Georgia, and cited by Big Brothers Big Sisters of Metro Atlanta for raising more than $27-Hundred dollars during that group’s singular fundraising event.

In 1942, when racial segregation was a legal requirement in the urban south, men from Eta Omega Chapter and the Butler Street YMCA secretly began The Hungry Club Forum so Black and White community leaders could break bread together and speak candidly. Those conversations are credited with greatly advancing the cause of racial equality in Atlanta.

During World War II, Eta Omega Chapter Brothers served ably in the U.S. military, including participating in the D-Day Invasion at Normandy and in the 332nd Fighter Group known as the Tuskegee Airmen.  In the post-war fight for racial equality, Eta Omega Brothers helped make the ballot box a weapon by mobilizing the Black vote through the Atlanta Negro Voters League.

From the Eighties, through the Nineties, into the New Millennium and up to today, Eta Omega men have continually played active roles in Atlanta’s progress; with individual Brothers and the Chapter itself being honored by groups including the Atlanta Public Schools-Metro Atlanta Chamber of Commerce and the Boy Scouts of America.

Dr. Carter G. Woodson states that men of scholarship lead the light of the world. This light—only Men of Eta Omega Chapter shall carry… and carry it, we will continue to do.